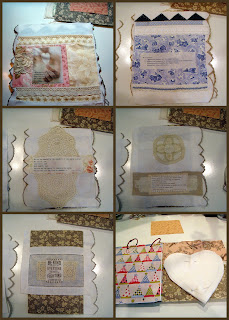 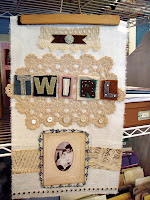 The last weekend in February I went down to Lake Jackson with four girlies for a weekend retreat of crafting.  Normally we have a room of 20 girls, this time it was an intimate group - all the same age and gosh, we had a blast.  We almost literally had a blast once we looked underneath the structure at the wiring which was a mess of extension chords - yes!... and I worked on a few projects:  a banner I started in Charlotte's class at The Creative Connection.  That is a picture of me with my Dad and TWIRL has a story here, which makes the picture significant.  I surrounded the frame with blue butterfly trim from a tattered hankie and a photo album frame.  I also started a fabric book of quotes and a birthday book from Pinterest.  It's about 1/3 finished - I'll work on it next weekend during National Scrapbook Day at H's house.  I used a damaged tablecloth and printed the quotes on special fabric called Printed Treasures that I purchased in NC at a fabric store.  There's a bit of ribbon, lace and stitching on the pages - I'll add some buttons too and some batting between the two pages and stitch them together into a book. 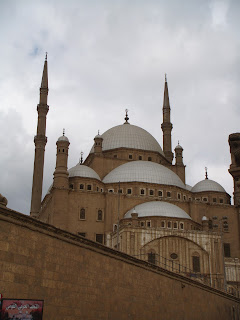 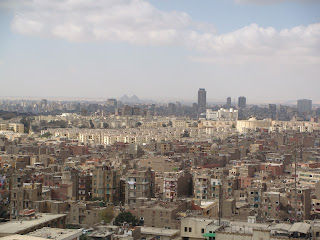 After the weekend away, I headed on a two week work trip that started in Cairo, Egypt for six days with a posse of 10, on to London and then finishing up in Aberdeen with a visit to our North Sea operations.  I was quite nervous about visiting Cairo because the anti-American sentiments were prevalent but it was totally unfounded.  Such an eye opener, such an amazing visit to see another part of the world, and the Muslim culture.  I feel so fortunate to have these opportunities.  See in the background the Giza pyramids?  This is a typical scene in Cairo - THOUSANDS of buildings half finished, half-occupied, laundry on a line in the dirty air.  The people were extremely kind.  We spent the first day sightseeing at the Citadel (1st photo), Sakara pyramids and Giza pyramids with a stop Friday night at Khan el Khalili (an outdoor shopping mall) where I smoked apple-flavored shisha tobacco & purchased a few perfume bottles.  I didn't like Giza because the hawkers were in your space since tourism is down 70%.  We spent one day going to our local operations and another in meetings with the Minister of Finance, Minister of Petroleum and EGPC.  The Minister of Finance was all pomp and circumstance and pretty impressive - we were treated like royalty.  That doesn't happen to insurance folks.  So much about Cairo, I don't want to forget.  We left Houston on Wednesday and left Cairo on Tuesday, heading for London.  It was the usual business meetings but several nice dinners, including one at The Goring Hotel, where Kate stayed the night before she became Princess.  I spent the weekend at Portobello market where I found a few more printers blocks and tons of nice lace.  On Sunday I headed over to Aberdeen for meetings on Monday and then back to London on Tuesday.  I walked along Cromwell, had a fabulous lunch at Paul's, then a visit to Victoria & Albert museum.  It was a long two weeks but I loved every minute of it. 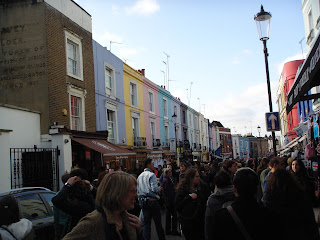 I have one other photo to show you from a few weeks ago... around 10 pm we heard a crazy sound - a crunching sound but not from a car wreck and metal... it ended up being this tree releasing its roots and tippng perilously close to my neighbors house. Crazy, huh! Click on it to see how it crushed the iron fence. Its been taken out and replaced by two new trees but kind of sad to see such an 80+ year beauty go. 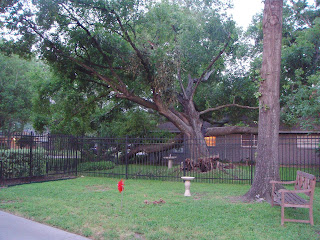 I'll blog this week about my trip to Austin, attending Country Living Fair and meeting and having a nice visit with Susie Harris and her sweet sister, Melissa but I call her Missy. 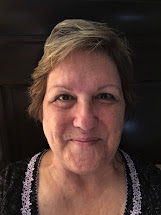 Enjoy Yourself - its later than you think!

Peggy Houston, TX
Trying to enjoy the ride of life and share and play nice with others. If I accomplish that, I will be happy.